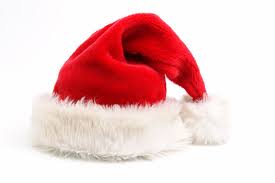 Christmas is a coming, the geese are getting fat. Please put a penny in Pecora Nera’s hat.

On the twelfth day of Christmas Mrs Sensible gave to me.

On the eleventh day of Christmas Mrs Sensible gave to me.

On the tenth day of Christmas Mrs Sensible gave to me.

I should have asked Mrs Sensible, not Mr Cretino to organise my Italian driving licence

On the ninth day of Christmas Mrs Sensible gave to me.

Wine by Marco Bellero, who is a bit of a hero of mine link

On the eighth day of Christmas Mrs Sensible gave to me.

On the seventh day of Christmas Mrs Sensible gave to me.

On the sixth day of Christmas Mrs Sensible gave to me.

OK 5 golden geese and a big brown one.

On the fifth day of Christmas Mrs Sensible gave to me. 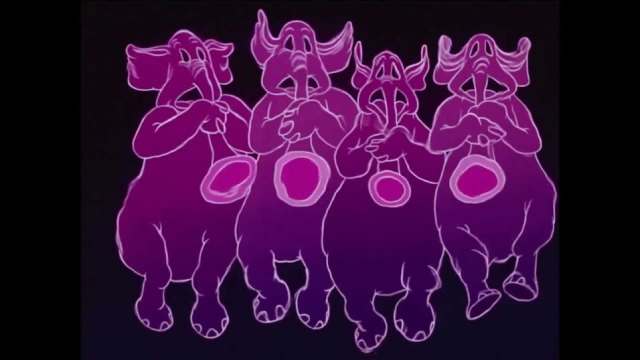 On the fourth day of Christmas Mrs Sensible gave to me.

Hello hello hello, what’s all this then, Mrs Sensible’s mum with a big pen knife?

On the third day of Christmas Mrs Sensible gave to me.

I hasten to add, Italians aren’t scared of trees. Only us poor Englishmen

On the second day of Christmas Mrs Sensible gave to me.

Gosh am I seeing double?

On the first day of Christmas Mrs Sensible gave to me.

This is the best picture I could take, Scooby Doo was not interested in being a model.

Merry Christmas to my blogging buddies.

Selfie – “a photograph that one has taken of oneself, typically one that is taken with a smart phone by stretching ones arm to the limit and then trying to press the camera button, the photo (that you will forever regret taking) is then uploaded to a social media website” – has been named word of the year by Oxford Dictionaries editors, after the frequency of its usage increased by 17,000% over the past 12 months. 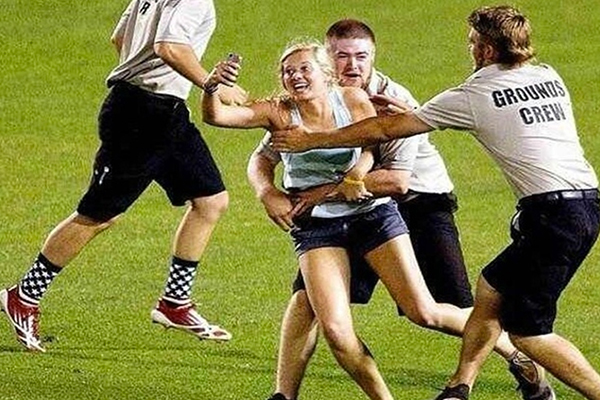 One of the few completely dressed ‘selfies’ on google

Purely in the aid of research, I did a quick search on Google images for ‘selfie’ and I was astonished, amazed and even gobsmacked at the number of women who took selfies of themselves in their bra and knickers.

If this post is a success, we may consider a 2014 Pecora Nera and Mrs Sensible calendar after all it worked for Rylstone Women’s Institute.

Cat food in the cupboard.

During the summer, I managed to lock a skinny, mangy looking cat into one of our garages. It wasn’t my fault, honest; it was raining and the cat had hid in the garage. Three days later I opened the garage to find a cat meowing and winding itself in and out of my legs. I was impressed that the cat had not peed or messed in the garage and I instantly named the cat Blacky.

Mrs Sensible didn’t think the name was appropriate, so she asked Luigina, if she knew who the scrawny cat belonged to. Luigina keeps her finger on the pulse of village life and was able to tell Mrs Sensible that the cat lives across the road with the woman who has the wolf that Gilda torments.

We carried the cat across the road and as we handed it back to its owner, one of her dogs jumped up and tried to eat one of the cat’s legs. While the cat meowed and tried to escape the dog, the lady told us that the cat was called Scooby Doo!!! Now I think naming a cat after a dog is even less appropriate than naming a white cat Blacky.

Blacky AKA Scooby Doo tucking into my salame piccante

Since the summer, Scooby Doo has decided to use our house as the local takeaway and we have fattened him up. He arrives at our house at 6.30 in the morning and then after 7.00 pm in the evening. He sits and meows outside our window until one of us gets up and finds him some left over scraps of meat. Last week the cat arrived and started meowing, but the cupboards were bare. We couldn’t find any left-overs that the cat could eat. We couldn’t get the cat to shut up, so we threw it some of my precious salame piccante.

The decision was made: we don’t own a cat but as he prefers to come here and eat our left-overs than share a house with a dog that wants to eat him, we decided to buy some cat food. The problem now is, Scooby Doo likes the cat food so much he wants to eat three square meals a day.

The time of day that Scooby Doo arrives is important and proves this cat is not stupid. From 7.00 pm until 7.00 am both Gilda and Lilla are under house arrest; they are both securely locked up and although it drives them mad to see and hear a cat meowing outside our window, there is nothing they can do.

This lunchtime, Scooby Doo came asking to be fed, but the take away was closed, so Scobby Doo decided to sit on my car and wait for opening time. And then trouble arrived in the shape of Gilda and Lilla. They often wander over from Luigina’s house to say hello. The cat froze. I ran in search of my camera.

From my bedroom window, I was taking photos and laughing at the two dogs. Scooby Doo was watching the two dogs and  Mrs Sensible and Donna (who became famous following the Vicious snake attacks defenceless woman in Italy post) were trying to distract the two dogs from the lounge window.

Lilla smelled a rat, or more likely a cat and wandered off in search of it.

Lilla scouts the area while Gilda begs for food 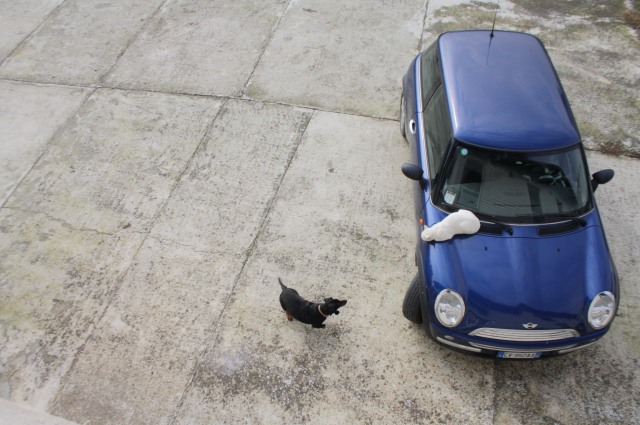 The cat looked at the short legged but extremely fat dog with utter contempt. And then Lilla arrived… 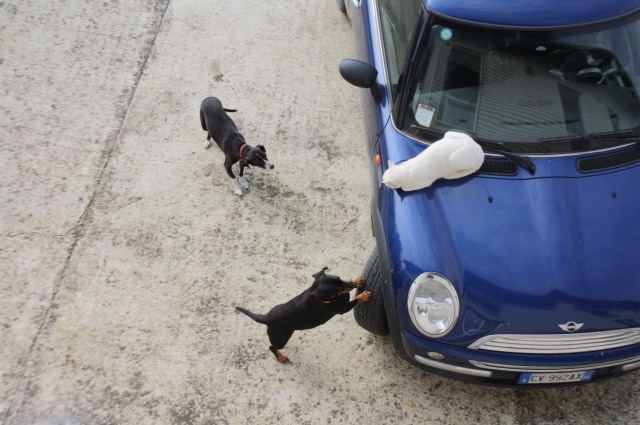 Lilla arrives while Gilda inspects whether there is sufficient tread on my tyres .

It was at this point that Scooby Doo decided it was time to take a leisurely walk home.

And then Scooby Doo launched himself into the air and Lilla did a back flip and attempted to catch the flying cat.

Is it a bird? Is it a plane? Is it superman? No Its Scoooobbbbyyyyy DOOOO

And then the chase was on. “GOOOOO Scooooby”… shouted Mrs Sensible and Donna.

Despite the fact that Gilda has short stumpy legs and is carrying several excess pounds and was also late at setting off, she soon overtook the trim Lilla. The only sound was the crowd shouting encouragement to Scooby as he ran for home.

Gilda, the short legged and incredibly fat dog, overtakes Lilla (These photos are not photo-shopped: Scooby Doo is so confident he is only using one leg)

As I precariously hung out the bedroom window, capturing the race for posterity and Mrs Sensible and Donna cheered the cat on. I did wonder if the high protein diet we are feeding Scooby Doo helped him in his escape from the terrible twosome. 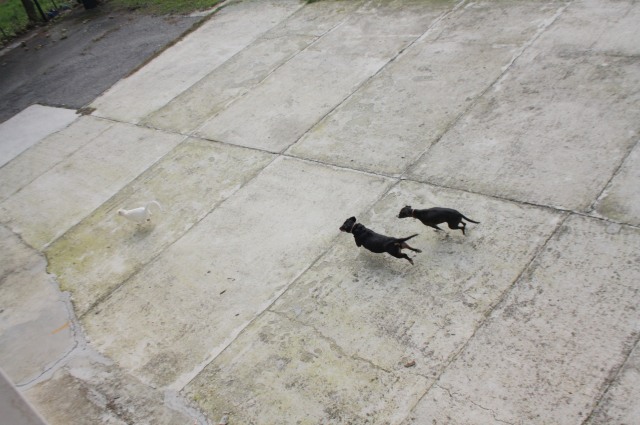 Scooby Doo widens the gap and heads for the garden fence. But just look at the fat dog fly…

The excitement was almost too much to bear; even the Grand National or Formula One is never as exciting as this.

Gilda who realises the race is all but over, decides to show off by imitating a kangaroo

Scooby Doo raced around the corner of the house, while Gilda who couldn’t corner as fast (due to her short legs and excess weight) ran directly in front of Lilla. The race was starting to resemble an episode from the Keystone Cops.

As Scooby Doo disappears around the house, Gilda, with flapping ears is unable to corner and runs in front of Lilla.

And with that, the race is over. The cat clears the fence and Gilda and Lilla screech to a stop. 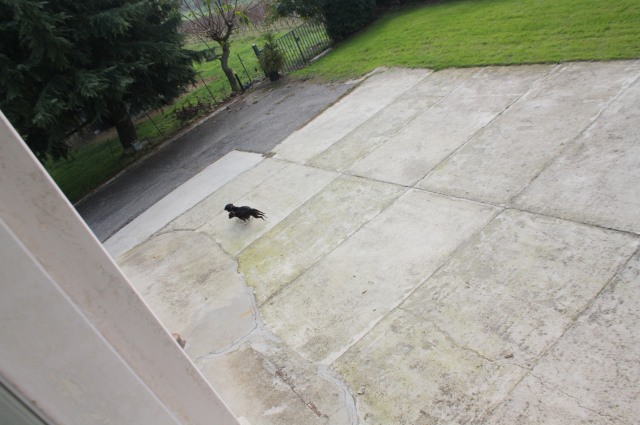 This evening at twelve minutes past seven, Scooby Doo came around for his evening meal.