I teach little Italian children English, I may be allergic to the little blighters, but I do try and teach them. This year I taught at my usual schools and I was asked to teach a small group of 5 year olds, when I arrived for the first lesson the group consisted of 24 kids and their ages ranged from 3 to 5. Three of the children needed special needs teachers and one of the special needs teachers needed medicating or some sort of psychiatric help. 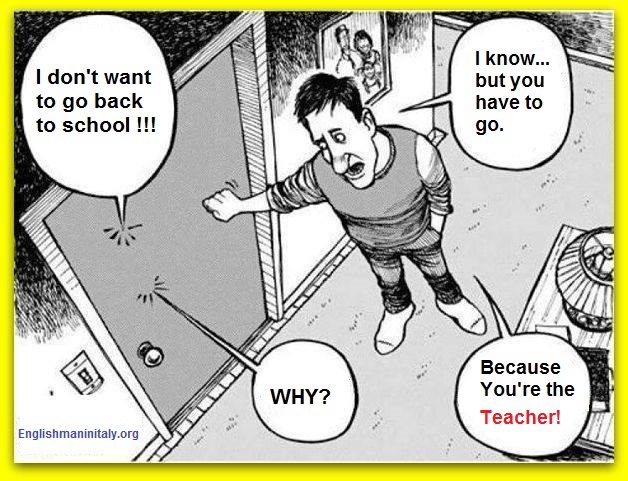 Anyway, I survived the school year and I received a text message notifying me that I could collect my wages from the Banca Popolare di Milano and it is next to the pizzaria. So I drove to the village and found the pizzaria, next to it was the CPA bank.

Hmm! I drove once more through the village, and then a second time. Finally I was just about to text the school and ask them if they had made a mistake when a man walked past my car.

Once again I tried to have a civilised conversation in Italian, using my limited vocabulary and dreadful grammar.

ME, Excuse me bad English, I look Bank Milano.

Man: It is there. (he was pointing at the Bank of CRA)

ME: There? No I need Bank Milano, no Bank CRA

The only part of the conversation I understood was, Bank Milano Problem…

Obviously I was asking directions from the village idiot. I thought I might have better luck from someone inside the bank.

Me: Good Morning (perfect Italian, but with a hint of an English accent)

Me: Where the Bank Milano Please.

It was at this point the earlier conversation with the ‘village idiot’ started to make sense.

I gave the woman my driving licence as proof of identity and told her I was there to collect payment from the local school.

Please don’t ask me why the school didn’t just transfer the money to my account. Because I have no idea. I did feel rich as the woman counted out my wages for the past six months and slid the small bundle across the counter.

To celebrate I called in at the Ristorante Italia and ordered a meal. Maurizio the owner, poured me a glass of red wine and sat at my table. Two plates appeared and then food and more food. 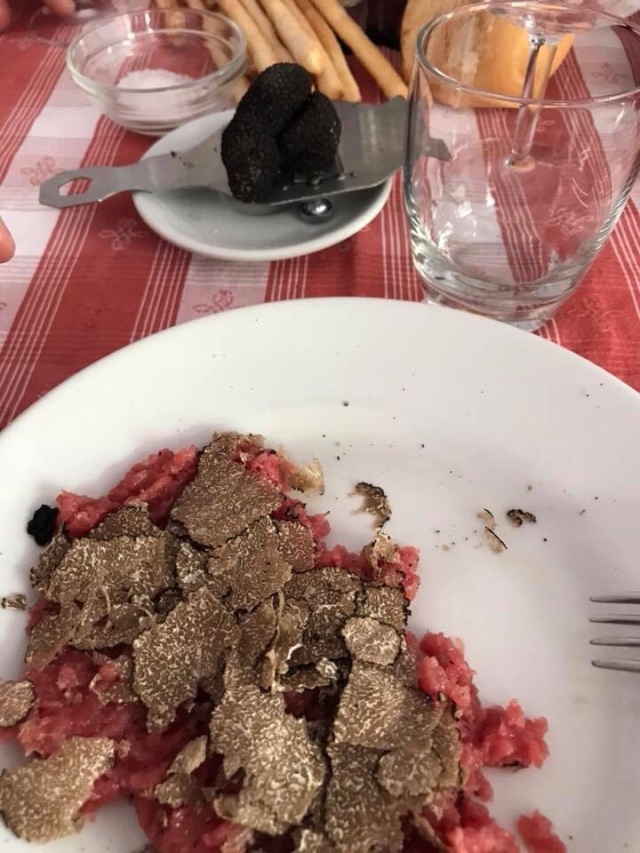 This is carne crudo (raw meat seasoned with lemon) served with lots of black truffle.

After several courses and a couple of glasses of wine, the bank phoned me.

I took out my wallet and Maurizio and I examined my out of date licence. This was not good news, for the past 3 months I had been driving with an expired licence and been stopped twice by the Carabinieri (I don’t think the carabinieri can read and wouldn’t have spotted the error) . Also I would have to go and see Mr Cretino and ask him to renew the licence. I remember the pain of dealing with him when I swapped my UK licence to an Italian one.

I asked for the bill. Maurizio refused to provide one, the meal was on him. (One of the privileges of teaching English to the local Restauranteur) maybe today would be so bad. 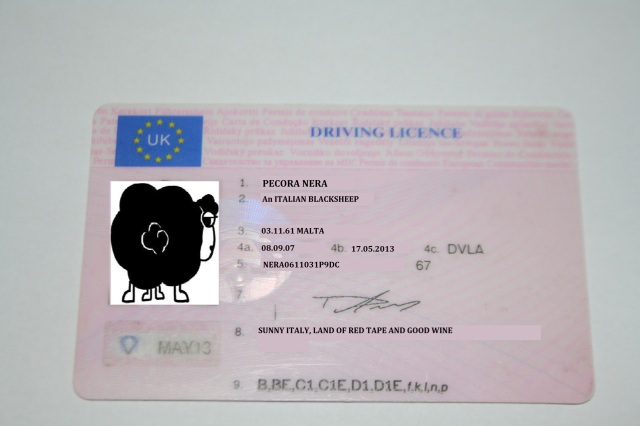 Forty minutes later I was standing in Mr Cretino’s office.

Mr Cretino: The doctor is in today, if you have your medical, we can give you your new licence in 10 minutes.

Hmm! More like 10 months… it took 9 month when he transfer my UK licence to an Italian one.

As I climbed the stairs to see the doctor, I remembered I was wearing contact lens and they are not as strong as my glasses, at the moment my glasses are at the bottom of a drawer after I dropped them and some twit stood on them. But hey ho the eye test only takes 3 minutes and I was sure I could pass it.

The big problem with Italian eye tests, is you need to not only be able to see the letters, you need to know them. For example an H is not an H it is cappa!!! Y doesn’t exist but when it does exist it is called ipsilon. And the vowels are a nightmare to remember.

I becomes E, E becomes A and I become confused.

What I really needed was this type of eye test. 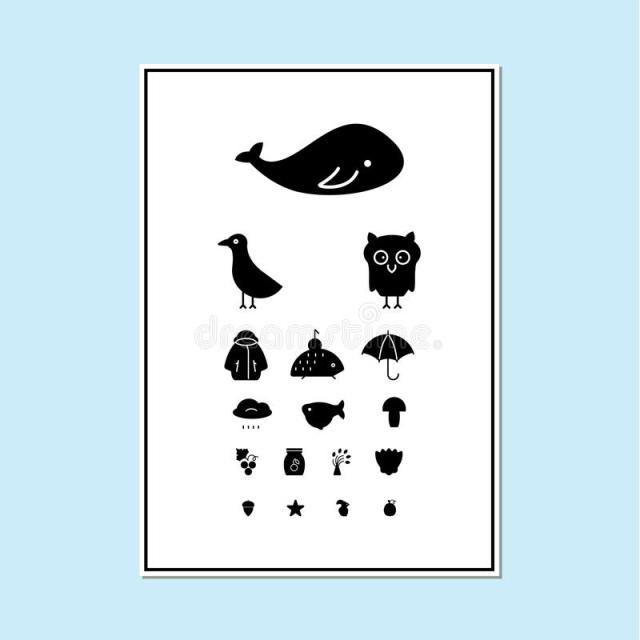 My type of eye test

Although I have no idea what an acorn is in Italian, or what the spaceship thing in between the coat and the umbrella is. My right eye was pretty good, I was quite impressed with my sight and pronunciation of the letters. However my left eye might as well been with my glasses in the drawer at home. 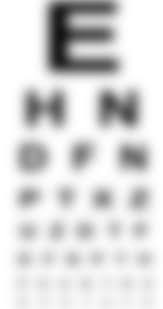 Blind as a bat

My first thought was, where has the chart gone, and slowly as I strained I managed to see some of the letters, notably the E which is an AE and the H which is cappa.

The doctor asked me if I wore glasses, I said yes but they are in the drawer, I am using, contact lens. I don’t think he understood me. He told me I MUST wear glasses and he was reducing my vehicles down to just a car. I would loose the ability to drive mini buses and trucks.

I said I would go and buy some new glasses and would return for a second exam, I don’t think he was over impresses with having to sit through another test with me. 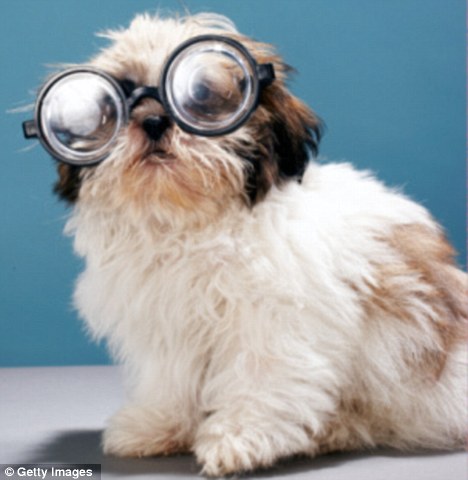 The dog wearing my new glasses

Mr Cretino didn’t take 10 minutes to create my new licence, he took 4 days. 4 days was pretty outstanding for Mr Cretino, and they must have decided it was to complicated to reduce the vehicles I can drive, because they didn’t eliminate any, in fact they added the motor bike onto my licence.  Maybe I should buy a motorbike. Beep Beep.