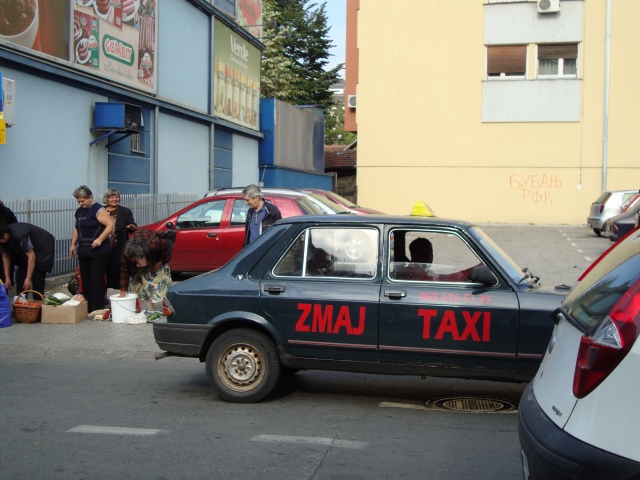 I survived my five days in Serbia as the translator for Franco our engineer. We flew with the Serbian national airways JAT and we were treated not only to a sandwich but a glass of pop and a cup of tea. I also noted that the airhostesses didn’t spend the flight trying to sell me lottery tickets, bus tickets and smoke free cigarettes. It was a pleasant change from Ryanair the company that I normally use to move around Europe.

We rented a little Chrysler Spark  from Unirent at the Airport, Alexsandar charged me 10,500 Dinar for the 5 days, it sounded like an enormous amount of money until I converted it to euros a paltry €90. Alexsandar said he would only charge me for 4 days because today is nearly over. It was only 8pm!!

Alexandar, Franco and I walked around the slightly battered car adding scratches and dints onto the rental form, there were so many I nearly just coloured the form in. When we reached the bonnet I pointed out a whole host of dents that did not appear on the form. Alexsandar raised his eyes to heaven and said “why should be on form, it is stone chip no? how stone chip be fault of driver?” Even so I coloured them in.

Sitting in our 90 euro hire car I tried to find the hotel on our Tom Tom, despite various searches it, failed to find the road I then tried the address of the factory which is the largest building in the city and only 2 kilometres from our hotel, again Tom Tom couldn’t locate the road.  After twenty minutes of fiddling with the Tom Tom I walked back to Alexsandar in the airport to see if he could help.

Alexsandra greeted me with a smile and “ah! you still here” I explained our predicament and he replied “Tom Tom no good in Serbia, only has big road on it” So our carful preplanning in the office and the €30 euro we paid to add the Serbian map onto the sat nav was a total waste of time. In the end we in-putted the city of Kragujevac and decided to just head for the centre and by a map.

Driving down a dual carriageway, miles from any civilisation and surrounded by very dark countryside my fantastic Tom Tom suddenly announced “you have reached your destination” Franco looked at me shrugged his shoulders and started to fire off a load of questions. Scusi non capisco I answered. Not really a good start to my week as his personal translator.

The following morning we tried once again to locate the factory with my beloved Tom Tom and failed miserably so we asked the nice lady in the hotel reception to arrange a taxi for us. Five minutes later we climbed into a Taxi that was even tattier than our hire car and set off in search of the Factory. Our driver was obviously practising for the Le Mans as he raced off through the chaotic streets. I don’t scare easily but I did whisper the odd prayer. The taxi cost a staggering 230 dinar, not only that but we had arrived at the wrong factory gate.

A second Taxi arrived and I flagged him down and shouted TAXI. The driver got out of his car and walked over to me and in pretty good English he said “where you go” I really couldn’t concentrate on a suitable answer I  just stood there staring at him with my mouth open while his taxi slowly but surely rolled away down the road without him. His previous passenger was still in the car and didn’t even bat an eyelid, maybe it is a common occurrence in Serbia. Franco broke the spell by pointing at the departing Taxi and shouting attenzione, attenzione.

While I suggested to Franco that taking this Taxi was not a good idea the driver set off running down the road after his Taxi. We did eventually arrive at the factory gates in one piece and another 81.20 Dinarios out-of-pocket.