I received a phone call from Franco last week; well to be honest Mrs Sensible received the call, I just stood next to her saying, what does he want? Did he set up the meeting? Is he coming over? Very reminiscent of my childhood. The days when my mum would answer the phone, and then decide if I could go out to play, or stay overnight at a friend’s house.

Franco asked Mrs Sensible if I was allowed to go out to play on Saturday. Franco and four of his friends, were going to the mountains on their motor bikes and I had been invited. Mrs Sensible said I could go. I was told to wear a heavy jacket, big boots and bring some spending money.

I understood the bit about the spending money; but the big boots and heavy coat seemed a bit of an overkill. We had just swapped Italian winter for Italian Summer with 10 days of spring squashed in-between. The temperature was forecast for 27°c.

Saturday arrived and at 6.00 am crawled out of bed and threw into the back of my mini two heavy coats and put on a thick pair of walking socks and my big hiking boots. I then set of for Franco’s house.

His bike is a Moto Guzzi California EV 1100cc, a really great looking bike, as I arrived, Franco was cleaning little bits of dust from the gleaming paintwork. Bits of dust that was invisible to the naked eye. The day was already starting to become hot, so I asked Franco, why the big boots and heavy coat? In case you fall off!!!

So complete with my safety boots, gloves and coat, we climbed aboard his bike and set off Tto meet up with his mates in Torino. Racing down the country roads, I began to notice how every time, I leaned in sync with Franco, or when he braked and then accelerated away, my stomach muscles pulled. I decided this would be excellent exercise and by the time we reached Cresole Reale in the Alps, I would have a stomach like a six pack.

In Torino we met up with his friends and set off at break neck speed for the mountains. It was great fun, when Franco leaned to the left I leaned with him, when he cornered right I leaned to the right. I have to add I was hanging on for dear life. After 30 mins of chasing through villages and country roads, I managed to relax a little. I was just admiring the river that was running alongside the road when Franco dropped the bike over to his left and went haring around a corner, I was still sat bolt upright and the bike gave a little wobble as Franco tried to control it. I say a little wobble, but we were racing along at 120 kph. I decided not to watch the scenery, but in future to just watch the road.

As we climbed up into the mountings, I developed an itch on my left nostril, just a little itch. But the more I tried to ignore it, the more it itched. In fact the itch started to include part of my cheek. My helmet was a full face helmet that belonged to Franco’s wife, it was a tad too small, and I couldn’t work out how to raise the visor. I was hampered by a thick pair of gloves, ignorance on how to open it and the fear of falling off Franco’s bike.

I tried sticking a finger in between the helmet and my neck, moving the helmet with the hope of catching my nose on the internal padding and as a last resort I tried to see if my tongue was long enough to reach my nose. After all, lizards can lick their own eyeball, surely I could reach my nose. Please bear in mind, I was still whacking along at 120 kph and trying to remember to lean with Franco.

As well as the itchy nose, I discovered the visor would suddenly steam up, and no I didn’t decide to lick it clean. But you will be pleased to know, that even though I had an itch, couldn’t see for toffee, and the helmet that was a bit too small and was giving me brain crush. I didn’t fall off.

Helmets that don’t steam up

Climbing up the mountain we came across a sign and barrier that said road closed due to heavy snow. The Italians looked at each other, shrugged and in true Italian fashion, ignored the warning and drove around the barrier.
Finally we had arrived; it had taken two bum numbing hours. My six pack now felt like a crushed coke can, my bum hurt and my arms ached from hanging on.

No chance of a six pack

After a couple of photos and a bit of graffiti, we decided to drive back to the nearest village for a beer.

The snow plough had cleared the road

While we were sat drinking and discussing how I had nearly ended up as a smudge along the road and the episode of the itch. They asked if I wanted to join them in October, for a little ride to Munich for the Oktoberfest.

If I am a good boy and Mrs Sensible says yes, I will go and buy a helmet and jacket for a bit of serious beer drinking.

The bikes and the bikers, thanks guys. 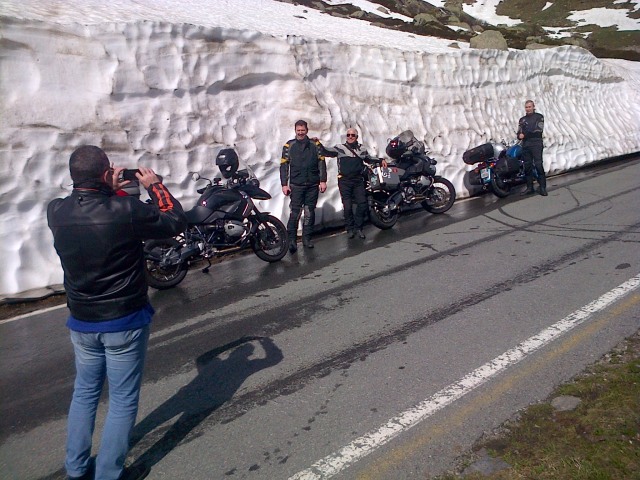 A great set of Guys

86 thoughts on “A black sheep on a motorbike.”